77 die in grief of Jayalalithaa`s demise 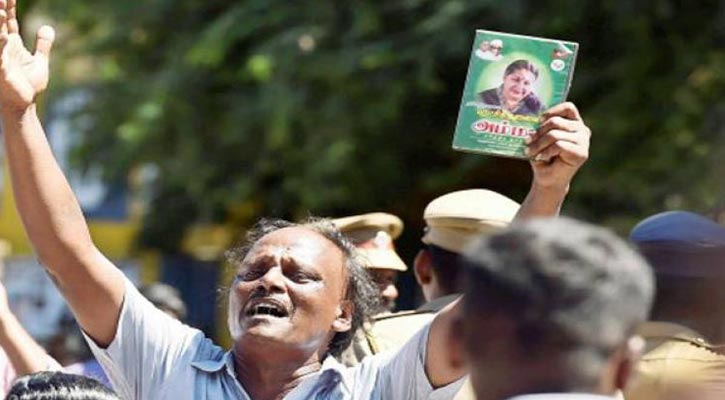 Risingbd Desk: In a statement issued, the AIADMK said a total of 77 persons died after hearing about Jayalalithaa`s illness and later on hearing about her death.

The AIADMK in Tamil Nadu on Wednesday said a total of 77 persons died of grief and shock over its supremo J Jayalalithaa’s illness and subsequent death, and announced a sum of Rs 3 lakh each to their families as relief.

It also announced Rs 50,000 for a party functionary who allegedly attempted self-immolation and a similar amount to another person who cut his finger off following Jayalalithaas’s demise on December 5.

“77 persons have died of grief and shock after having to come to know of honourable Amma’s (Jayalalithaa) illness and death,” an AIADMK release said.

Meanwhile, a central intelligence estimate has put the toll at 30 besides four suicide attempts. The AIADMK release did not specify whether the illness referred to her September 22 hospitalisation or the cardiac arrest she had suffered on December 4, a day before passing away.

The party also released the list of 77 dead persons, who hailed from different parts of the state.

AIADMK expressed grief and sympathies with their families and announced a sum of Rs 3 lakh each as family welfare fund.

Further, the party will also bear the medical expenses of the AIADMK functionary from Puthukoorapettai in Cuddalore district who had attempted self-immolation following Jayalalithaa’s illness, it said.

Similarly, Makali of Ugayanur in Tirupur district had chopped off his finger after coming to know of Jayalalithaa’s passing away and the party will bear his treatment cost too, the release said.

AIADMK also announced relief of Rs 50,000 to each of the two persons.

3 of a family among 4 killed in Kurigram road crash

Trial against SK Sinha, 10 others begins