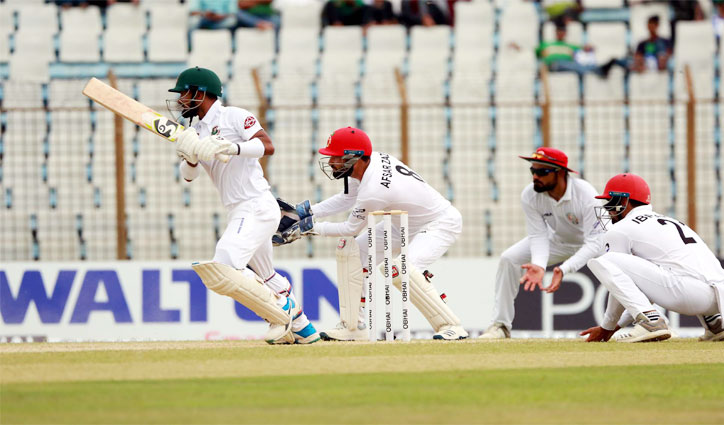 The touring side had a first innings lead of 137 runs. They were all-out for 260 in their second innings.

In the first innings of the match, Afghanistan scored 342 after winning the toss with Rahmat Shah hitting the maiden Test ton for them and Asghar Afghan scoring 92.

The play of day four was delayed due to rain in the morning and the match started at 11:50am at Zahur Ahmed Choudhary Stadium, two and a half hours behind schedule.

Afghanistan resumed their overnight score of 237 for eight and added 23 runs before losing the last two wickets. At the close of play, the visitors stretched their lead to 397 runs for the hosts.

Earlier, Afghanistan extended their lead over Bangladesh to 374 at the end of play on day three of the one-off Test on Saturday.

Afghanistan recovered from 4/2 and finished the day at the score of 237/8 as debutant Ibrahim Zadran made his maiden Test half-century and found support in Asghar Afghan, who struck his second fifty of the match.

Zadran amassed 87 runs before he was scalped by Nayeem Hasan. Afghan became a victim of Taijul Islam after playing a knock of 50 runs.

Rashid Khan provided some quick runs in the lower-order as he scored 24 off 22 balls. He was also dismissed by Islam. Afsar Zazai (34) and Yamin Ahmadzai (0) will resume their innings on day four.

Earlier, Bangladesh resumed their innings from 194/8 and were bowled out for 205. They were only able to add 11 runs to their total from day three.