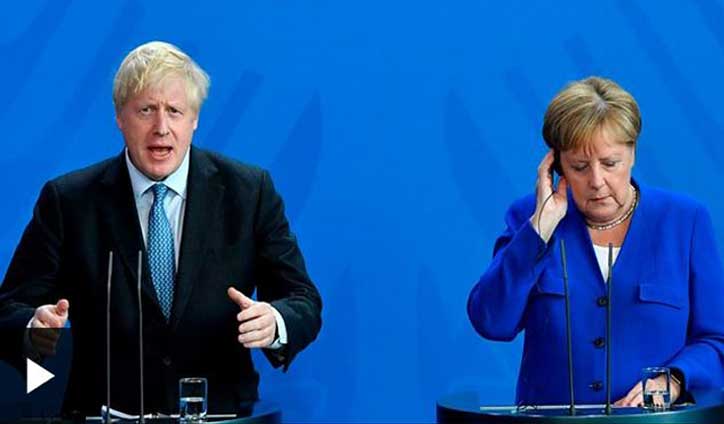 International Desk: German Chancellor Angela Merkel has suggested an alternative to the Irish border backstop - a key Brexit sticking point - could be found within 30 days.

Speaking at a news conference alongside Prime Minister Boris Johnson in Berlin, she stressed it would be up to the UK to offer a workable plan.

The PM said he was "more than happy" with that "blistering timetable".

He accepted the "onus" was on the UK, but said he believed there was "ample scope" for a new deal to be reached.

In his first overseas visit to a fellow leader, Mr Johnson is meeting Mrs Merkel after he told the EU the backstop - which aims to prevent a hard Irish border after Brexit - must be ditched if a no-deal exit was to be avoided.

He will meet French President Emmanuel Macron on Thursday, before attending the G7 summit on Saturday alongside other leaders including US President Donald Trump.

The EU has repeatedly said the withdrawal deal negotiated by former PM Theresa May, which includes the backstop, cannot be renegotiated.

And - despite Mrs Merkel's comments - that message was echoed by Mr Macron on Wednesday evening.

"Renegotiation of the terms currently proposed by the British is not an option that exists, and that has always been made clear by [EU] President Tusk," he told reporters in Paris.

At the news conference, the German chancellor said a realistic alternative to the plan would require "absolute clarity" on the post-Brexit future relationship between the UK and the EU.

"The backstop has always been a fall-back option until this issue is solved," she said.

"It was said we will probably find a solution in two years. But we could also find one in the next 30 days, why not?"

Mr Johnson replied: "You rightly say the onus is on us to produce those solutions, those ideas [...] and that is what we want to do.

"You have set a very blistering timetable of 30 days - if I understood you correctly, I am more than happy with that," he added.

He added that alternatives to the backstop had not been "actively proposed" under his predecessor Theresa May - but he was pressed by Mrs Merkel to spell out what such alternatives might look like.

The prime minister has insisted he wants the UK to leave the EU with a renegotiated withdrawal deal, but the UK must leave on 31 October "do or die".