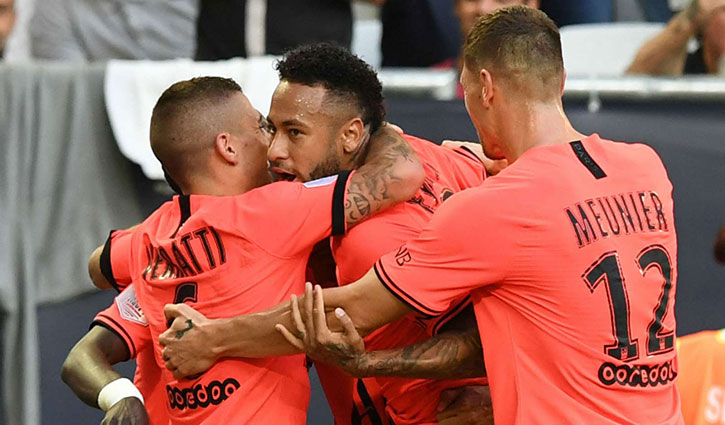 Kylian Mbappe and Neymar played together for the first time this season and combined for the goal that gave Paris Saint-Germain a 1-0 victory in Bordeaux as well as top spot in Ligue 1.

Mbappe, who had been out injured since August 25, started on the bench but, with PSG struggling for a breakthrough, came on after an hour.

The Parisian attack immediately gained a more menacing edge. Both Mbappe, with a shot, and Neymar, with a header, went close before combining to open the scoring for the game's only goal in the 70th minute.

Mbappe outpaced the Bordeaux defence on the right. His precise low cross presented Neymar with a tap in at the far post.

"The most important thing is that these goals are decisive, in tight matches, that's why I'm here," Neymar told French broadcaster beIN Sports.

"It's obviously a pleasure to link up with Kylian again. He came back with his smile and with his football talent," he added.

The last time Mbappe and Neymar had appeared together was in the French Cup final last April, a match which ended in defeat.

As Bordeaux pressed, Mbappe and PSG began to carve open the home defence.

He burst through on his own, but goalkeeper Benoit Costil anticipated the chip.

Then Costil again reacted quickly, diving at Angel Di Maria's feet as the Argentine ran onto Mbappe's angled through ball.

PSG, who had suffered a shock 2-0 loss to Reims on Wednesday, survived a late video review for a potential Bordeaux penalty to recapture first place.

Angers, who host Amiens later in the evening, could draw level on points with PSG with a victory.

Nantes had briefly moved to the top of Ligue 1 when they won 1-0 win at Lyon earlier in the day.

Lyon had the best of the chances but conceded the only goal in freakish fashion just before the hour.

As Samuel Moutoussamy broke into the home area, left-back Fernando Marcal slid in and attempted to poke the ball out for a corner. Instead, it struck his other leg and looped over goalkeeper Anthony Lopes and into the goal.

As the home fans whistled their team, the Lyon players appeared increasingly lost, although the brilliance of Nantes goalkeeper Alban Lafont was a major factor in their failure.

Lyon remain 11th after a seventh match without a win, a run that includes three losses and three draws in the league and a home draw with Zenit St. Petersburg in the Champions League. They visit RB Leipzig in Europe on Wednesday.

Nantes had not won in Lyon since December 1996, a run of 17 matches. The victory continues their revival under coach Christian Gourcuff.