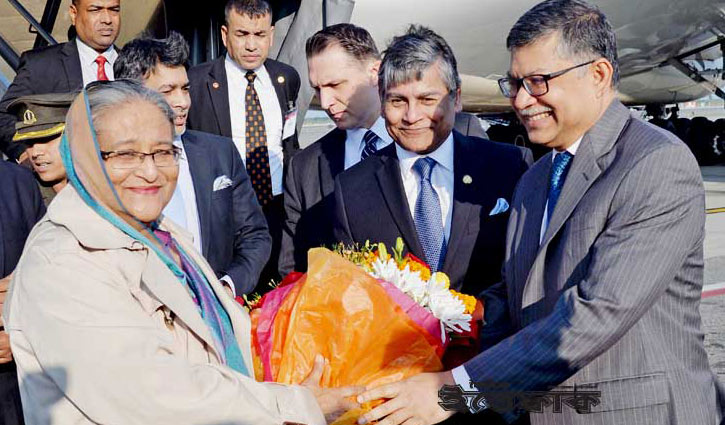 Prime Minister Sheikh Hasina arrived in New York on Sunday afternoon local time via Abu Dhabi on an eight-day official visit to the USA to attend the 74th session of the United Nations General Assembly (UNGA).

She will deliver the country statement at the 74th Annual General Debate of the UNGA on September 27.

During the visit, the prime minister will hold bilateral meetings with her Indian counterpart Narendra Modi on September 24 and UN Secretary General Antonio Guterres on September 28.

Bangladesh Ambassador to USA Mohammad Ziauddin and Ambassador and Permanent Representative of Bangladesh to the UN Masud Bin Momen welcomed her at the airport.

Later, a ceremonial motorcade escorted the prime minister to Lotte New York Palace Hotel, where she will stay during her visit to the USA.

Upon her arrival at the hotel, the local Awami Leage leaders greeted the prime minister by presenting her with bouquets.

Earlier, Sheikh Hasina departed from Abu Dhabi International Airport for New York at 10:45 am local time on Sunday after a one-day stopover in the UAE capital of Abu Dhabi.

The prime minister left Hazrat Shahjalal International Airport in Dhaka for Abu Dhabi on Friday.
On September 23, Sheikh Hasina along with Spanish Prime Minister Pedro Sanchez will co-chair the Multistakeholder Panel to be held in parallel to the High-level meeting on Universal Health Coverage at ECOSOC.

Besides, the prime minister is expected to present the national statement at the plenary session of the high-level meeting on universal health coverage at Trusteeship Council.

She will also deliver a statement at the climate action summit in the UN General Assembly Hall and attend an event on “Recognising political leadership for immunization in Bangladesh”.

She will have meeting with Queen Maxima, the UN Secretary-General’s Special Advocate for Inclusive Finance for Development, at the UN Headquarters (UNHQ) Booth.

She will attend a side event to be hosted by Global Commission on Adaptation at Conference Room 7, UNHQ and the State Luncheon to be hosted by the UN Secretary General at North Delegate’s Lounge.