This anarchy should be stopped 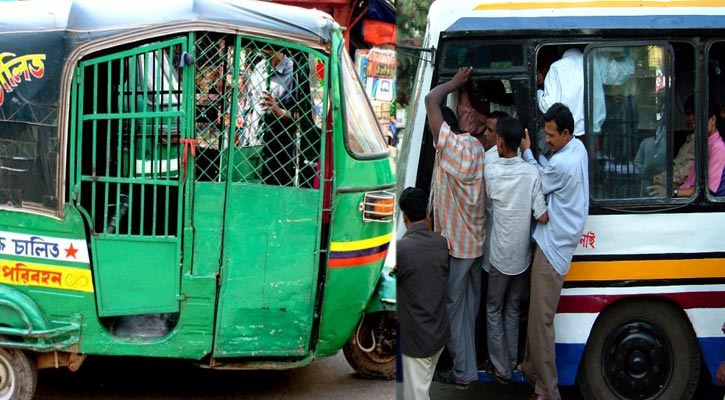 It seems that it is not possible to stop anarchy in the movement of CNG-run auto-rickshaws. There is no discipline in paying fare for auto-rickshaws and taxicabs ply on city streets.

Drivers are charging their passengers according to their wish. Due to this, dissatisfaction is increasing among city commuters day by day. Although the authority has fixed fares in different time, it is not maintained. It can be said that passengers have become hostages to auto-rickshaw drivers.

There is no discipline not only in auto-rickshaws and taxicabs but also in public transports in city. On the other hand, anarchy over fare exists as well. Public transport means buses will stop at a stoppage after a certain period and leave the stoppage after taking passengers. Buses should not be waiting for long even if there are more passengers at the stoppage. But we are experiencing an opposite scene in this case. It is often seen that buses and minibuses of bad condition are moving in the city streets. The buses are seen to take more passengers. For this, the vehicles get packed with passengers. Passengers are seen to pay extra charge.

The organisation has collected this information after conducting a survey on over 2,000 auto-rickshaws and the survey was conducted in 40 areas including Sayedabad in the capital. The situation was not developed even after complying with a demand of 60 percent fare increase from drivers and owners around a year ago. As a result, the passengers are suffering a lot. Again, the passengers are being forced to go to their destination with extra charge as the numbers of auto-rickshaws are less than the demand.

But the drivers have counter statements in this regard. They say the owners of auto-rickshaws are taking double fare from them although the authority has set a deposition of TK 900 a day. Besides, TK 10 to 20 is to pay as extra money for picking passengers from different places. As a result, they face loss if they operate their vehicles on meters.

How many days will this condition continue? How many days will the passengers have to suffer? Bangladesh Road Transport Authority (BRTA) should take effective steps to stop this anarchy. There is a law to cancel registration or route permit if the drivers are reluctant to go on meters. But the reality is that it is not being implemented in most cases.

Peace and prosperity should bestow upon all

Eid Journey should be safe

Holy Ramadan may bring self-purification for all

Real rights of labourers should be ensured